Wow...2016 has been the year from hell. I knew we were off to a bad start when David Bowie died. Bowie was one of my favorite musicians, and his loss was a blow to me. I was just coming to grips with the concept of a world without the Starman, when my absolute favorite musician, Prince, also passed away. Looking back, I believe this year will one day be known as "The Year the Legends Died". In addition to the aforementioned musicians, we've also lost folks like Glen Frey, Merle Haggard, Muhammad Ali, Arnold Palmer, Gene Wilder and so many other giants that it's just staggering.

Likewise, my personal life has been through the ringer. My mother-in-law passed away, after a very sudden, rapid decline. It was a shock to all of us, and one we all took rather hard (despite the stereotype, I got along well with my wife's mother). Next up, a coworker discovered she had cancer, and that she was going to have to take some drastic measures to fight it. Shortly thereafter, another friend from my old church passed away from a long battle with cancer. In the midst of all of this, my wife decided she needed us to separate...a shock that I'm still trying to process.I won't go into all the details here, and I can't say for certain what the future holds for my marriage, but let's just say that it certainly is a painful process.

In addition to all of this, my thyroid issues reemerged, with weight gain, fatigue and skin rashes adding to the fun. For some odd reason (sarcasm), I started to feel incredibly depressed. Since I have been battling depression & anxiety since my teens, I have been on medication for quite some time. About every 3 to 5 years, I have to switch meds, since I tend to build up a tolerance to them. Whether or not it was solely situational, or the result of drug resistance, I decided I needed to visit my doctor for a consultation. It was decided to ween me off of one drug, while slowly introducing another into my system, which is fairly standard procedure. In the past, I've never had more than mild withdrawal symptoms when switching, so I didn't really expect what happened next. I was weening off of Cymbalta, and noticed that I was experiencing a rather brutal case of "brain zaps". For those unfamiliar, brain zaps are a fairly common withdrawal symptom of anti-depressants, but they usually fade after a day or two once you've switched to a new one. The feeling is akin to having a strong electrical current passing through your entire head, thus the name. After two weeks off of Cymbalta completely, I was still getting intense zaps, which I'd never experienced in the past. In addition, I started to experience short-term memory loss, nausea, migraines, and (my personal favorite) night terrors! This all culminated in me suddenly experiencing intense paranoia coupled with extreme depression. Like I mentioned earlier, I've dealt with depression since my teens, but this was a new level for me. At this point, I still hadn't connected the dots that it was the withdrawals from Cymbalta that was causing all of this, with the exception of the brain zaps. When I finally figured all of this out, I took to the internet to discover that I wasn't alone...apparently this drug has this effect on many people, and it is considered one of the worst in terms of withdrawal. A friend of mine confided to me that she had been through the same ordeal, and she probably came up with the best description I've heard to date, when she said it felt the way you'd imagine it would feel to be around the Dementors from Harry Potter. I felt like all life and hope was being drawn out of my body. In that moment, I knew how those who had committed suicide must have felt, as I had to fight to not give in to the abyss that seemed to have opened inside of me. I kept thinking of my children, and held on to my faith in those dark moments.

One night, the night terrors were particularly bad as I awakened to find a hand upon my mouth and nose, unable to move or breathe. In that moment, I wasn't sure if I was going to survive. About a year ago, I had watched a documentary about night terrors called "The Nightmare", & I remembered the description that the various victims described. I was able to calm myself down when I realized what was happening. Still, being unable to breathe was terrifying, and in that moment I knew it was likely that I wouldn't survive. Finally shaking off the sleep paralysis, and regaining the ability to take oxygen into my lungs, was a relief, to say the least.

Needless to say, I couldn't take being in such a state indefinitely. I called my doctor, who put me on a lower dosage of Cymbalta to get rid of the symptoms. In a couple weeks I'll be going back to discuss with him exactly how we should proceed from here. I know I don't want to continue taking this poison, but I also don't want to experience that hell again.

I don't post all this to try to elicit pity. In fact, it seems like almost everyone I've talked to has related to me that their year has also been incredibly difficult. Illness, death, financial woes, personal strife...it seems like everyone I know has really gone through their own form of perdition in 2016. No, I relate all of this for a couple of reasons: one, if you have been on Cymbalta (or its generic counterpart) and you experience anything like this YOU ARE NOT ALONE. Get a hold of your doctor immediately to address what you're experiencing. It can literally kill you...if not from suicide or sleep apnea then from seizures or strokes (I didn't experience either of the latter two, but many do). Second, I also want to explain the long gap in my postings, as well as why there has been no Halloween related content here so far.

On the plus side, my family & friends have been very supportive. My sister, my kids & even my estranged wife have been there for me in some of my darkest moments. Some of my longtime friends have spent late nights listening to me and providing sound advice. Since I've been living in an apartment, I have no home to haunt this year. Rather than let this get to me, I took the opportunity to take a job at a local professional haunted attraction called "Screamworld". This haunt has been a favorite of mine for years, so it's great to be on board as a member of their cast! I don't know if I'll make this a regular thing for the Halloween season or not in the years to come, but right now it's a fun way to get my mind off the various crap that is going on in my life, and the world at large.

Hopefully, this won't be my only blog post of the Samhain season, but you never know. I'm trying to look at October 31st in much the same way as the Celts did in ancient times: as a time of reflection and the end of a cycle. I'm hoping that the cycle so many of us seem to be in this past year will be reaching its conclusion, and that better days are ahead for one and all.
Labels: 2016 sucks Anxiety Cymbalta David Bowie Death Depression Drugs are bad Halloween m'kay? Night Terrors Prince Withdrawls

Guillaume said…
Very sorry to read that you had such difficult year and are going through such a dark time. I have heard of others who had issues, big or small, with 2016. I have been very lucky myself: since September I'm a new dad. Although it does bring its share of anxieties, it's a positive life changing experience.
October 14, 2016 at 6:07 PM

Willow Cove said…
May I say, I respect you for your honesty. it has been a rough year at our house too.. My twin step daughters are leaving their teens and getting older in college. That'll make any dude go bald. Their biological father killed himself when they were young while battling depression and bi-polarism. They have been trying to handle a lot of baggage while starting to show systems themselves. Needless to say a lot of strain on me and my wife over the years. High school and teen life is rough enough!. Humor has helped a lot in our house. Hang in there! The Halloween community is great to find support and understanding and to just focus on something else for a little bit. Keep going, never stop moving forward. Brian.
November 4, 2016 at 5:07 PM

The Gill-Man said…
Thank you, Brian! I appreciate the kind words & support. My children also experienced their biological father committing suicide when they were young, so I sympathize with your struggles. Right now, I'm just taking everything day-by-day, and praying for better days ahead for us all!
November 7, 2016 at 1:28 PM 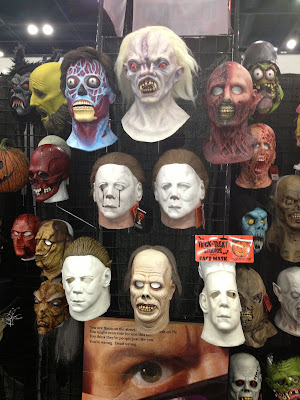